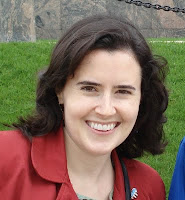 Amy, you are a client in addition to working as one of my editorial assistants. You contributed to and edited the short story collection "Missing" from Echelon Press and after your book for the library profession "A Year of Programs for Teens" was so successful you have a contract to do version two of it. Tell us about these projects.

The "Missing" anthology began when I wanted to do something about the news in the Chicago area especially about missing young wives, mothers and even young children. I had contributed a short story to Echelon's "The Heat of the Moment" in 2007 published for a charitable cause and I asked CEO Karen Syed if she could do another anthology, this time benefitting the National Center for Missing and Exploited Children. I offered to edit it, and she agreed. My husband and I adopted our second child just as the stories came in and I did a lot of reading while Owen slept on the Boppy on my lap. My story is about Alana, an antiques store bookkeeper and her search for a missing sister, teen and disappearing cookbooks.

Young Adult Librarian Kimberly Patton and I wrote A Year of Programs for Teens and did many workshops as a result. That topic is something libraries often seem to need new ideas for. That's exciting - that so many places want to offer fun services for teenagers! American Library Association Editions asked us for a second edition, and we had done enough new programs to fill up another. It will be out in 2010. When we were in contract negotiations for that, editor Stephanie Zvirin asked me to write a readers/program guide on teen mysteries for 2011. Mysteries are a specialty of mine, and I review them for Crimespree magazine.

Working as your editorial assistant actually teaches me as much about my own writing as it does about the business. When I ask prospective clients to add more action or to reshape their proposals, I think about ways to improve my work as well!

What other writing projects do you have on your plate?

I am self-publishing another Alana story called Felled by Fruitcake on my site soon with recipes, and sales will help the local food pantry, which is really struggling right now. I'm just polishing it up.

I maintain a blog on Vintage Cookbooks ( http://vintagecookbooks.blogspot.com ), and have just started doing library talks on that topic. I'm amazed at the response, and several places that hired me are asking me to sell cookbooks. I modernize older recipes and adapt them. For example - prunes are everywhere in the old cookbooks, and no one now wants them in cakes! So a cookbook proposal is in the works. I find this amazing - and so different from anything I'd imagine I'd be doing as a writer. I put a mini cookbook on Kindle to go along with my talks, too (it also helps the food pantry). That even includes some of my Grandma Curtin's recipes.

I know you are a young adult librarian and have been a national officer in your professional library organization. Tell us about that role and the programs you do along that line?

The Young Adult Library Services Association (http://www.ala.org/yalsa)is filled with energetic and welcoming people. It was a privilege to be elected to their Board twice, including a term as their Fiscal Officer. I've been involved with many projects for YALSA during those times and since, and one thing I do for YALSA is trainings for library staff on teen services. I have presented over 80 workshops and panels nationally on teen literature and services, and I always get as many ideas as I give, I think. Certainly I meet wonderful people doing great things for teens with often very little resources. I'll be doing an online class for them in February on Power Programming. The teens I work with at the library are always amazed that people want to hear me speak. They ask what I have to say!

What's the best piece of writing advice you ever got? The worst?

I took a class from J.A. Konrath which helped tighten up my prose a great deal. He also says that a writer who never gives up is called Published. Certainly your advice on presenting my writing and myself like a pro has made a big impact on my career. Honestly I had not previously thought about writing as a business to pursue with a plan or marketing strategies!

The worst? I did pay for a critique at a children's writer's conference once where the author told me I knew nothing about teens...

Anything else you'd like to take this opportunity to say?

Open your mind to possibilities. If your story you slaved over does not get accepted right away, think of other talents you have and other ways to get yourself out there (and in front of editors!).

Thank you Amy for all you do to advance reading for young people.
Posted by Terry Burns at 6:00 AM

Great interview! I enjoyed getting to know you, Amy. I LOVE the best advice you've gotten from J.A. Konrath. So so true!

Wishing you many blessings.