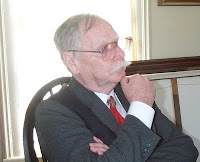 Do these book trailers really do any good? There’s a big discussion going on over on one of these lists about this, on that recurs often from place to place. In the case that is being talked about the publisher wants trailers to go on a DVD the sales reps can use to go out and pitch books and in that case the answer is they will absolutely do some good. I have a friend that is in book acquisition for some bookstores and he tells me they simply do not have the time to read all the books they acquire so they depend on some trusted review sources, or sometimes the decision is made as simply as the cover and how they think it will display on the shelves and be picked up. They would look with great favor on such a DVD.

But how about your average reader? Are they swayed by trailers? Do they even see them? Who knows? Putting my writer hat on I try to build things in to various promotion sources when I can that will show me where success is coming from. After all, most of the time when we sell a book we don’t know what triggered that buying decision. Word of mouth is the most effective thing, I think most people agree on that, but how was that word of mouth promotion generated?

Does the trailer do that? Do blog tours do that? Promoting the book on various online groups, is that what makes it happen? Doing book-signings and programs and being a guest on radio or TV or getting interviewed somewhere, is that it? The answer is yes, all of the above and anything more that we can think of.

It’s great when we can decide something is definitely working so we can do more of it. It’s even good when we see something doesn’t work so we can not do it again. I did a contest with one of my books that drew no entries. That means I wasn’t out the prize for the contest as nobody won it, and just the existence and promotion of the contest may have triggered some sales, no way to tell. But on the surface the contest was a bust so I won’t do it again.

It’s called platform and while we seldom can tell what is really triggering purchases, the more of it we have the better. P T Barnum, the old circus promoter, said it. He said “I don’t care what you say about me as long as you spell my name right.” He meant all publicity is eventually good publicity. I’ve seen folks with very questionable activity in their past get elected to office. Voters didn’t remember WHY they recognized the name, they just knew it was familiar. I’d rather people be more discerning than that but it proves the point.

People buy books because they see a name they can identify with more than anything else. How did the name become familiar? It might have been that book trailer, the author may never know. Or it might have been any one of the other activities the author is doing to generate visibility. And you want to know the funny thing? The purchaser may not even know themselves why they are familiar with the name, they just are.

You make some very good points. With book videos, though there are certainly some very good reasons to think they work, many of us are wondering which ones work best and whether the cost is worth it. I produced my latest book video on the cheap, but it still required several hours and license fees. I see some that use stock images and videos. People are paying for them like they should, stock videos and images are not without cost. To do a video like I would like to do it would require thousands of dollars and it might not be any more effective. And that just leaves us with a big question mark.

I have NO IDEA whether trailers work or not... but I am a new author and I am willing to give anything a try.

My publisher suggested a trailer, and after scratching my head, I decided to do it. It's a very short video, one minute long. My publisher (Dundurn) has uploaded it to their website and it has also been posted to You Tube.

I don't know how many people have seen it via the publisher's site, but so far the trailer has had 350 views on You Tube.

Deciding on the content of the video was tricky. That and a very tiny budget. Rather than regurgitating the story or reciting the synopsis from the back of teh book, my trailer talks about the personality of the main character, Sasha Jackson. Have a look at the trailer here and tell me what you think:

I suppose it is too soon yet to know if this has had much effect on sales. Perhaps I'll know better after Christmas (fingers crossed).

Cheers, Jill
"Blood and Groom" is now in stores!
www.jilledmondson.com

I can only speak for myself. I like book trailers. It's a step above reading the back cover which I always do before I buy a book.

As a reader, I can't help but watch book trailers. Many times, I find them cheesy but they do send out some major advertising.

Okay,so I create book trailers and I think they are wonderful! Many of my clients come back again and again with their new releases. They do work ... if you work'em! Meaning that you can't expect not to do a lot of legwork yourself.
There are so many things you can do with a professional trailer ... and, yes, they do cost money. There are fees that must be paid for music, VO, photos, film clips ... and time to write and edit.
Once you have a TRAILER TO THE STARS video, you have a major part of your marketing plan. You want to make CDs and carry them with you! Play your video at all signings ... you'll find that you are not having to 'sell' your book over and over again. The video draws people to you and your book.
Your publisher uses it to show to sales staff, put on their website and make it available to bookstores online.
When that video is sitting right next to your BUY button ... it makes a difference in sales.
As long as you have that book in print ... you can launch it and re-launch it as often as you want. Your video is always fresh and point on ... to promote your book.
Any questions? Let's talk. VideoTrailers@aol.com
http://www.trailertothestars.com

Great post!!! I made a book trailer through a free site but I was disappointed with it...music selections were awful and it just wasn't the overall look I wanted. I realized recently that I have the software on my computer t make a slideshow set to music, so i can make my own trailer with my own music. I need to get going on it!! Thanks for the reminder!!

Great article and great discussion! Plus I'm glad to get your name and site, Misty Taggart. One of these days I'll be contacting you. . . :-)
www.milliesbooks.org

My trailer for How to Keep Your Inner Mess from Trashing Your Outer World (Monarch, 2009)... has had over 1,000 hits on YouTube... I'm not sure how that translates into sales, however. It's funny and whacked out, but I've gotten good comments. You can check it out at: http://www.youtube.com/watch?v=A8EzaReSKg0